A Form Of Whimsy – twenty years on 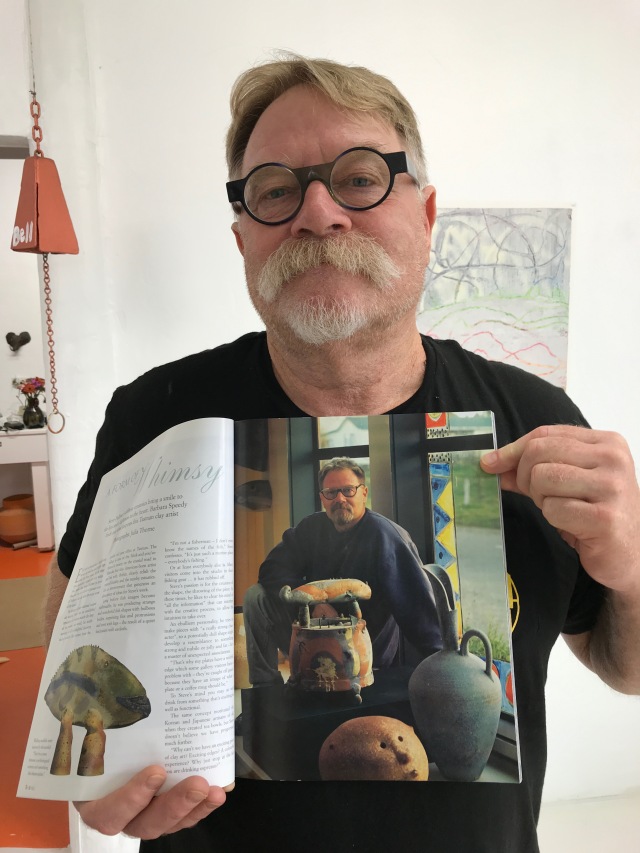 Steve Fullmer’s offbeat ceramics bring a smile to the lips and a lightness to the heart. Barbara Speedy* finds out what inspires this Tasman clay artist

Eels lurk in his garden, a face ghosts across his window, and fish on legs stalk his front room. By the time you encounter a kettle pot with wings, you realise that Steve Fullmer is more than just one of a clutch of potters west of Nelson – he’s an artist in every sense of the word.

As winner of many national ceramic art awards, Steve has an established reputation; for visitors outside the loop of the ceramic art world, his studio workshop is still a delightful discovery, around the corner from the quaint old Post Office at Tasman. The village is one of the blink-and-you’ve-missed-it variety on the coastal road to Motueka, but this American-born artist and his wife, Robin, clearly relish the tranquil locality and the nearby estuaries. It’s an environment that generates an abundance of ideas for Steve’s work

Long before fish images became fashionable, he was producing strange and wonderful fish shapes with bulbous bodies, surprising fins and protrusions and even with legs-The result of acquired fascination with axolotls.
“
I’m not a fisherman-I don’t even know the names of the fish” Steve confesses. “It’s just such a marine place – everybody’s fishing”

Or at least everybody else is. Many visitors come into the studio in their fishing gear….. it has rubbed off.

Steve’s passion is for the creation of the shape, the throwing of the piece. At these times, he likes to clear his mind of “all the information” that can interfere with the creative process, to allow allow his intuition to take over.

An ebullient personality, he tries to make pieces with “a really strong character” so a potentially dull shape might develop a resemblance to something strong and nubile or jolly and fat – he’s a master of unexpected associations.

“That’s why my plates have a wobbly edge which some gallery visitors have a problem with – they’re caught off guard because they have an image of what a plate or a coffee mug should be.”

To Steve’s mind you may as well and drink from something that’s exciting as well as functional.

The same concept motivated the Korean and Japanese artisans of old when they created tea bowls, but Steve doesn’t believe we have progressed much further.

Why can’t we have an exciting piece of clay art? Exciting edges? A colourful experience? Why just stop at the fact you are drinking espresso?

Steve’s “domestic ware” has developed into a mainstay of his business over the past two years, spurred by the need to support a young family along with a greater involvement in family life as his children Millie (14) Freddie (10) and Henry (8) grow up. His functional tableware still carries the unmistakable Fullmer stamp, of ghostly faces, hints of the mysteries of outer space and the weird and whimsical. And you drink more than coffee from his latté cup, discovering touches of fun and understated surprise.

An appreciation of his subtle humour is filtering through the country and he also has orders from a gallery in Texas and one in Japan. Ironically, by easing the pressure to create and sell serious clay art, he’s found himself impelled into a new creative explosion.

He has handbuilt a diesel kiln, with doors through which he will ladle fluxes and fire a jet burner on to a new range of “art pieces”. The works will be presoaked in salt water so that during the firing process they will “burst and boil”. Wine bottle glass laid on top of the pieces will melt and run down the sides.

Steve refuses to predict the results or just to say whether this range might mark a return to exhibitions outside his Tasman Gallery, but he has a sneaking suspicion the art scene is ready for work like this.

“There’s going to be a lot of room for serendipity – I like that, flying by the seat of your pants…..an innocence.”

Steve still prefers unglazed surfaces, the coarseness absorbing the light, reflecting only the tactile quality of the original clay. Once he might have wiped a drip, corrected a slip, but now he allows it to stay.

“It’s a mistake and someone had to do it. In 50 years it will be the mark of something made by hand.”

* Barbara Speedy is Director of the excellent Diversion Gallery in Picton.
https://thediversiongallery.co.nz/