Peter Jurnicek, a young Czech potter, visited New Zealand in the early years of the millennium, working with a number of clay artists and interviewed  Steve for his website 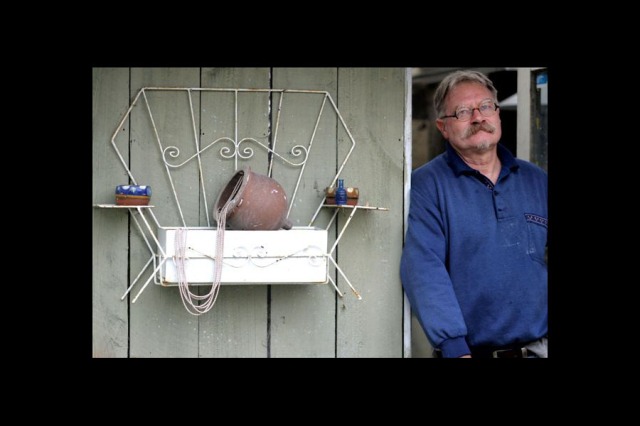 Steve Fullmer arrived in New Zealand in 1973 on a working holiday. In 1976 he established his own studio and a wood firing kiln in Mahana, Nelson. His early influences were the studio potters but he soon found the need to create his own aesthetic using coloured slips and alternate firing techniques. His passion was and still is the creation of the shape, the throwing or handbuilding of the piece.

Although Steve’s ceramic artworks have won him numerous accolades including twice winning the Fletcher Challenge Award his domestic ware has become the mainstay of his business. For Steve it is equally important that the bowl we eat from is beautiful and functional. His tableware still carries the unmistakeable Fullmer stamp of ghostly faces, hints of the mysteries of outer space and the strange and whimsical. He loves his work to have the mark of the maker in it, often unglazed surfaces, drips and other signs that this is the work of an individual artist not a machine. For this reason all Steve’s work is handmade and decorated by him.

1. How, when, where and why did you begin with pottery?
My Brother Douglas and two of his best friends took a pottery class at the local Junior College (like a Polytechnic). It was 1970 and I was taking drawing and design classes thinking this was most likely the direction I would end up in. Also to my surprise my brother kept bringing home sums of money he had made from selling pottery to other students. This had quite an effect on me as well. I really like the permanence of a fired piece of clay and one could glaze it in so many ways. I finally took a day class in another Junior College in Long Beach California in 1972 and I really caught the bug of working with my hands, being able to colour it with similar materials then fire it to make it hard. Wow!

2. For how long did you work for other potters before you started your own pottery?
In 1972-73 I was taking both day and night classes to better myself as both teachers had different methods of working. In 1973 I came to New Zealand and applied for a clay throwing position at Beach Artware making simple items but I wasn’t good enough although close so they offered me free clay and wheel eight hours a day for a week. By the second week I was on the payroll. I worked alongside Dan Steenstra a profoundly brilliant hand thrower. He was Dutch and his father and grandfather and uncles were all hand throwers back in Holland. I watched Dan a lot and learned much from him and I worked 8 hours a day plus would come back in the evening and do 2 more hours overtime just throwing lidded jars and salt pigs! I left New Zealand in 1974 for Australia and landed another throwing job for Courtland Potteries brick and tiles in Perth. A much bigger operation – hand throwing terra cotta planters and an “octopus” pot which was a straight cylinder with a base then two holes to run a rope through. The octopus climbs in and the fishermen pull them up. Here I learned to throw larger pots as they were throwing up to 90lb planters which I never did but I learned it was no big deal, just confidence. At the end of 1974 I came back to New Zealand and worked at Beach Artware for one year but by this time I was wanting to go out on my own. I finally left the production pottery behind and built my own wood fired kiln in 1975 at Mahana, near Nelson in the South Island.

3. Can you tell us (something) about the technology you use?
I use an electric throwing wheel, a slab roller and a large hand extruder. These are my three main ways of producing work. Recently I have been making clay negative moulds also. I created a plaster of Paris positive mould and make my own paper clay mix for wall pieces and large table bowls.

4 Have you developed some of your own, original technologies?
Petr I am not sure if this is the technology you are talking about but many years ago I developed purely by accident a technique of washing off glazes from a bisque fired piece. I know that water will wash off material but I have learned that if there is a lot of china clay in the mix it is harder to wash off so I use mostly coloured slips applied to the bisqueware and I am careful to wash off some areas and not others. It produces a worn, layered look. There is an art to knowing how much to wash off. This led me to dip all my bisque tableware in water first so as to have less problems like pinholing in the glaze.

5. Are you able to compare conditions for potters at NZ and USA?
A big question for anyone to really answer. New Zealand is so small and struggles to make an impact with the customer. We have so much imported junk now, most people aren’t aware of the personal beauty held in a hand-made item. In the US the same problem exists only on a larger scale. My own brother has stopped being a potter after 37yrs. He mostly did craft fairs all around the US. Often the weather ruined a show or some other element out of one’s control. Often other potters would steal your good idea and the next time at the show several potters were doing your stuff. There’s not much one can do about it especially in the US markets. In NZ it would be pointed out that you stole someone’s idea. My own situation is I sell from my own gallery and several craft galleries throughout New Zealand. I don’t use a computer or web page. [He does now.. :-)….]

6. You use earthenware, why?
The hills and land around me is made of earthenware clay and I like exposing a lot of clay body on my work. I like the look of terracotta (earthenware), its beautiful colour in its natural state and its fired personality.Also the firing temperature is low so there is a saving on fuel(electricity). I fire my earthenware to 1180c which is high for earthenware. I like the colour it becomes and the durability.

8. Do you only produce hand-thrown tableware or do you sometimes make sculptures as well?
I do both tableware and sculpture. I love tableware, there is a satisfaction in making repeat forms and learning subtle changes. Sculpting is just as serious but for me takes many years to encourage people into seeing beauty in one’s work. I would like to spend much more time with sculpture but larger works are very expensive to send to galleries. The question is can one afford to just make one off pieces. I find one has to practice making Art constantly moving from one to the next.

9. Where do you find inspiration?
For me I was just born with it, life, eyes open, feel it, smell it, live it, make, make, make!

10. Do you think some of your children will be working as potters as well?
No.

2 Responses to What Steve says

This site uses Akismet to reduce spam. Learn how your comment data is processed.